Let us return to the Before time, the long long ago… before Husband was my husband… before we were even dating, actually.  Because I was in high school, and he was really into women who were… well, women.

Now he’s just into me.

We’re talking about 1995!  It was a mixed bag, my friends: People were writing letters to Snapple, Montell Jordan proclaimed this is how we do it, Waterworld happened, Hugh Grant got a blow job from a hooker instead of from Elizabeth Hurley[1]… but we also got the Playstation, which made the world a magical place.

Meanwhile, Husband was in Macedonia, where our story does not take place.

He and some other beret-wearing lads took their two-week leave and hopped a train to Thessaloniki—which is where Husband left most of them.  You’ve read the title of this post, so even now you might be thinking that he should have stayed with the larger group, or gone to Egypt instead.  But that is not our story.  No, in our story, he continued on to Athens to meet his parents, sister, and sister’s boyfriend (I know, right?) who were all discovering for the first time that Athens is beautiful if you’re standing up on one of the picturesque tourist spots and pretty dang dusty and dirty if you’re not.  (This is not a cultural judgment issue, this is about the amount of sand and dirt and dust that blows around.  If you’re not expecting it, you’re going to disappointed.)

But they’re practically giving away the gorgeous marble.

Husband took the family around touristing for a bit so that they could learn to properly despise Greek cabs.[2]  You know, here’s the acropolis, nifty little flea market (where he bought that marble chess set for like $15), please eat some gyros—the only foreign food my in-laws will acknowledge and now they’re actually kind of gyro snobs, which is hilarious but also totally reasonable, because gyros are fucking awesome.

Through all of this excitement and confusion, Husband managed to wrangle his very domestic (a word which here means “not well-traveled”) visitors onto a ferry to Santorini.  Because—and I know this isn’t a travel blog but please believe me—if you’re going to Greece, you need to visit at least one island and get very drunk there.  I’m pretty sure it’s a law, but do your own research; I am not your damned search engine.

We come now to the cause of all the reasons I’m glad there are no photos of this trip: the sleeping arrangements.   See, my in-laws are “hip” and “progressive” in a very specific way that I still don’t understand, so when it was explained to them that there were three different options for ferry tickets, they chose:

Alice, if you’re reading this, don’t even try to tell me that he’s the favorite ever again.

The three young people looked at this arrangement and agreed it was weird and that they would just all hang out on the deck all night anyway, because cool!

Oh my god, you guys, I just realized how long it’s been since I was that young.  Now I’m sad and need a drink.  Hang on, brb.

Okay, I’m back.  I went for the shiraz, in case you care.  Where were we?  Oh, right… spending the night in deck chairs as only 20-somethings can.  (At this point, nobody has peed on anybody.  Just wanted to make that clear.)

It worked out alright for Husband, because you know who else had a deck pass?  A dozen or so hot Aussie students on the traditional college tour of the world’s fine liquors.  Their charms wasted on Alice, she eventually realized that deck furniture isn’t actually a substitute for a bed and started making noise about finding hers.  Chris, being male and young and in possession of a rapidly draining bottle of Ouzo, wanted to stay on deck and talk to their lovely new friends (who were, Husband tells me, both lovely and friendly).

No, wait.  Let’s not have too much sympathy for Alice.  Her parents had two children and one of them got a bedroom.  (And a condo, but let’s not get me started on that.)

That left Husband in the company of all twelve lovely, friendly ladies.  Yay him, right?

He swears nothing happened, that they talked and drank all night.

Actually, I believe him.  Because:

Okay, so now we’ve got a dozen hotties and my man (who had no idea that his future wife was somewhere stressing her locker assignment—which was bullshit that year, hopelessly inconvenient—and probably would have suggested that you’d been hitting the Ouzo yourself if you tried to tell him) drinking on deck.

Eventually, even at sea, Nature will call.

Peeing in the ocean is something everyone should do at some point in their lives.  Most of us scratch it off the bucket list as children, but Husband was never much of a beachgoer and now seemed like an excellent time to… water the ocean.  So he staggered off to do just that, unzipping at the rail and loosing a magnificent stream into the wind before rejoining his new friends.

Yet another thing that’s easier for men…

It wasn’t until the cruel light of day—and, let’s face it, sobriety—that he realized, as they disembarked, that the rail he’d pissed at didn’t face the ocean.

It faced the aft deck of the ship.

He still hasn’t peed into the ocean, but he has peed on some innocent strangers who thought the rain and fog suddenly got a little heavier and warmer.

So that’s how Husband arrived at his Santorini adventure: in shame.

And some poor stranger arrived soaked in piss.  Probably especially foul piss, too.  Remember, he was drinking and admits that he was not keeping properly hydrated; it wasn’t exactly an asparagus situation, but there’s no way it was pale and odorless. 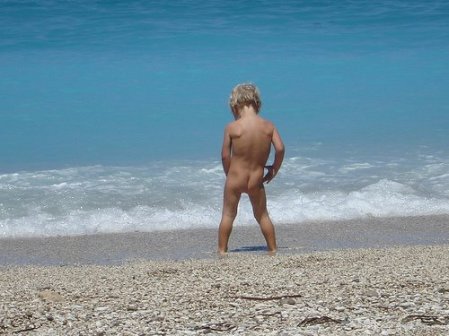 Seriously, how do you grow up in a coastal state and never do this?

[1] I’m still not over that, but apparently she is.  And, frankly, if I looked like Elizabeth Hurley it would take me much less time to forget pretty much any bad news.  Because I could just look in the mirror and make myself happy again, you know?

[2] A word on Greek cabs, because this will be important later: you are probably accustomed to calling for a cab and having it come to you and take you directly (more or less) to your destination.  If you live in a large enough city, you might even be able to skip the phone call and just hail the damned thing right off the street, but the bottom line is that your cab is your cab and it goes where you say and the meter keeps everyone honest.  This is not the system my future in-laws were faced with.  Instead, cabs were driving around with their windows rolled down so that people standing on street corners might shout their destination at passing cabs; if the driver liked your direction, he’d swerve to add you to his car—which may or may not already have passengers in—and whisk you away to somewhere near your destination without ever touching the meter.  Meter?  Why would we need the meter?  Your driver knew exactly what you owed and would continue to shout it until you paid (or successfully negotiated him down).*

[3] We called her Alice before, so I’m going to stick with that.  We’re calling him Chris because I think that might have been his name and fuck that guy.

* I am told that the situation is moderately better now… sort of.  In some areas.  Basically, there are still a lot of things you need to be careful of, because Greek cab drivers are almost certainly criminals but also probably not violent ones (which makes them safer than Über, right?)

14 comments on “Peeing on Strangers – A Greek Adventure, Pt I (Story Time!)”