We’ve been over the shopping thing, and the reasons why he doesn’t take me with him.  You’re all familiar with his rules and how boring he makes shopping, and his aversion to awesome, and you know as well as I do that he only complains about my presence and the things I do when I’m there.

Brace yourselves, because I just got in trouble for not being there.

Okay, technically I was there, because it was Target and you know how I love to roam the aisles and fill up the cart with crap we didn’t know we needed—I’ve got a pair of hot pink socks with black fishnet overlay, for fuck’s sake—and on this occasion I’d wandered off to prowl the sportswear section in search of yet another pair of yoga pants.  You knew I don’t wear real pants at home, right?  Well, if you didn’t then there’s your learnin’ for the day all done; knock off early and commence with the day drinking. 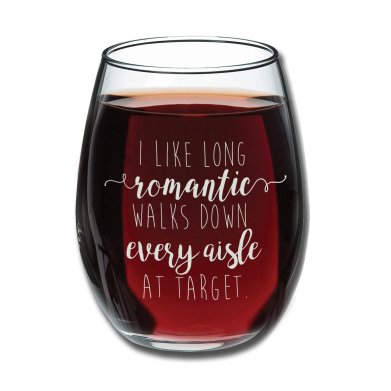 Oh yeah, trying to explain the underwear.  I swear, this is why I’ll never be a Professional Writer: I can’t tell a story in order to save my life.

Quick version: Husband bought some underwear while he was at Target without me one time (he didn’t even tell me he was going, which… I mean… why would you do that to me???) and when he got it home and opened the package he realized he’d accidentally bought briefs—AKA Man Panties.  He tried to hide the mistake, thinking he’d return them before I ever found out, but I can sniff out an embarrassing mistake like one of those truffle pigs; I was laughing at him before he could find the receipt.

And that’s why we were at Target.  Together.  Only not, because he’d turned left (toward the men’s underwear and socks and things) and I got caught up trying to find some yoga pants that weren’t exactly what I already own but also weren’t just a sad Laundry Day version of my favorite pairs.  This is my Sisyphean task, and I don’t know why I put myself through it.*

HIM:  Are these the right thing?  (holds up pack of underwear)
ME:  Um… yeah?
HIM:  (firmly)  Okay.
ME:  You know what under—
HIM:  You walked away while I was shopping for them!  But you did it while my back was turned, so when I turned to ask you if they were the right thing—
ME:  (laughs)
HIM:  YOU WEREN’T THERE!  And I’m sure the poor random Target employee—
ME:  (screaming hysterical laughter)
HIM:  …was confused and scared when I turned and asked her if this (shakes package) is the kind I usually wear!
ME:  (clings desperately to chair, having lost all muscle control to laughing fit)

He stormed out while I was pulling my shit together, so I didn’t get to ask if this means I’m allowed to go to the grocery store with him.  Ooh, maybe I’ll even get to go to the drugstore!

I know Liza does the Dollar stores, but there’s no way he’d let me go there.

*Also, the pants I bought that day turned out to be about three feet too long once I got them home, and we’ve established I’m not short.  So clearly it was my day for the boulder to roll down the hill.**

** Also-also, it just occurred to me that I could start a whole Times We Tortured Target Employees tag, or at least Adventures in Target.  Which, given how hard it is to walk out of there for less than $200 might explain why I’m broke.