Friday’s child was un-fun and I promised you something lighter.

Can we talk holiday prep?  Because it’s me, and you know it’s already ridiculous.

This is my new favorite thing in the whole wide world: 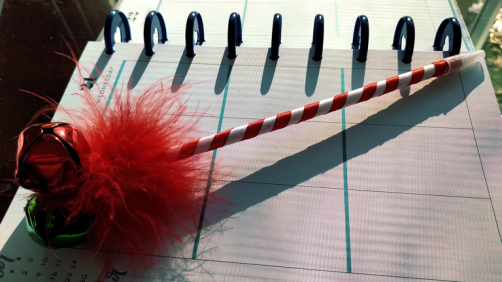 How… everything is that?  Sure, it’s not glittery—I actually thought about adding glitter or rinestones, but I didn’t want to be tacky.

And the best part?  They were basically giving them away!  In the grocery store, of all places!  We’d been to every market in all of St Louis—because (and seriously, what is your fucking deal, Missouri?) apparently they throw out all of their pumpkins on November 1st, and the idea that someone might actually use a real pumpkin for, you know, baking pumpkin things was a totally foreign concept to everyone I spoke with last week.

ME:  I think I offended Brad.
HIM:  ?
ME:  The produce guy.  Did you hear that conversation?
HIM:  No, I was too far away.
ME:  I kept asking—because he said they didn’t have pumpkins, but that doesn’t mean there are none anywhere in the city—where I can buy pumpkins.
HIM:  (nods)
ME:  And he told me to check down in the baking aisle.  He said, “we’ve got some down there.  They’re in cans, but—“
HIM:  (winces)  Ohh.
ME:  Yeah.  And I stopped him.  I said, “No, honey.  Canned pumpkin is for dogs.  I need actual pumpkins.”  He flinched.  Like I’d slapped him.
HIM:  (laughs)  I did see your interaction, and it seemed to not go well.  I mean… and it did look like maybe he was offended at something.
ME:  I’m sorry if canned pumpkin is his favoritest food in the world or something, but…
HIM:  No, we do.
ME:  That’s honestly why I keep a can in the house.  For the dogs.  When they have diarrhea.  Stops ‘em right up.  Think about that, Brad.
HIM:  (laughs)
ME:  (sighs)

So it got later and later, the night we met Brad, but I was determined to find pumpkins.  I won’t tell you where we finally got them, because there’s no point.  I cleaned them out.

These have to last through Thanksgiving and Christmas, because we may have to convert a guest who thinks she doesn’t like pumpkin.*

As of the moment this post goes live, we are still not 100% sure Offspring will be joining us for Thanksgiving.  He’s planning on it, we’re hoping for it, but… there are still hiccups getting him situated in his new unit and that’s a possible barrier to holiday travel.  Plus, at best he’ll be flying on Thursday, so… nervous!

Does this stop me from planning a ridiculous feast in order to send him home with a week’s worth of leftovers?

Remember who you’re talking to.

But all that planning has exposed some deficiencies in my (famously) shitty kitchen.  Which is fine, because it’s an opportunity to shop.  Online, of course, because I cannot be arsed to actually get dressed and venture out unless it’s for socializing.  Or candles.  Or those amazing pretzels at that one pub… shit, now I’m hungry.  Where was I?

Right.  His insufferable lack of appreciation for all the things I do for him.

ME:  One thing I can’t do without for Thanksgiving is a probe thermometer—we need to replace ours, and I’m sick of the cheap ones.  Can you research—
HIM:  Yep.  On it.
ME:  Thank you.
HIM:  … I recommend this one.  Now, six probes might seem like overkill but I’m also thinking of using it for barbeque.  We’re in St Louis, after all.
ME:  (sighs)  I’m not angry at multiple probes—I actually think I would use that.  Because sometimes I’ve got multiple things that need…
HIM:  (nods)
ME:  … probing.
HIM:  Exactly!
ME:  …
HIM:  …
ME:  Are you kidding?
HIM:  (confused)
ME:  I handed that to you.
HIM:  Oh…
ME:  You know what?  I’m gonna go (points) but when I come back, you’d better have a joke ready.  (stalks off)  (mutters)  Perfectly good setup wasted.

*More on her later—I should probably get permission from Offspring before I tell you all about his girlfriend.

** Yes, I make the pumpkin pie from real pumpkins and the rest of them from frozen.  Welcome to my brand of insanity.  If anyone else was capable of making a decent pumpkin pie I wouldn’t have to do this.

18 comments on “Can You Have Too Many Probes?”