Our actual anniversary is in December, which is perfect for us because of my love for the holiday season, hot chocolate, and letting other people throw my party.*

It would be rude.

But spring—according to some dead poets—is the season of rebirth and romance.  I’ve never noticed, because I have eyeballs and can see that the trees are still bare and everything is dripping, but maybe all the Great Poets are blind?**

Regardless, spring is more or less here and I—in the spring of my fifteenth year of marriage to a man who tricked me into marrying him—am realizing I still don’t know him at all.

I mean this in the best way possible, under the circumstances—which are tragic, don’t get me wrong—I’ve decided to think of this as proof that there are still hidden depths to the man who confessed to urinating on strangers before our first kiss.

Go read about it.  It wasn’t even the weirdest thing about that trip.

Our story begins like most tragedies: in the bedroom.  We were cuddling of a morning, discussing the day’s agenda as best we could considering we get sidetracked by the slightest thing and then it’s off down a rabbit hole…

ME:  I don’t know why pineapple on pizza gets such a bad rep.
HIM:  I think it’s fine, it’s just a very wet ingredient so you have to consider the other things you’re putting on the pizza.  You don’t have to do that with other things.
ME:  I don’t know, I mean… you’re always trying to consider the balance of the pizza you’re creating—
HIM:  Sure, but like, pepperoni goes with everything.
ME:  Except pineapple?
HIM:  (pulls face)
ME:  See?
HIM:  Okay, sausage.  Sausage you wouldn’t put with pineapple either but—
ME:  See, that’s where I respectfully disagree.  Because one of my favorite pizzas is pineapple and sausage and black olives.
HIM:  (repeats yuck face)  Okay.  I don’t know why you’d do that, but… sure.
ME:  Because it’s delicious.
HIM:  I just don’t see what the black olives bring to the pizza.
ME:  Deliciousness?
HIM:  Okay, but… they don’t have any flavor.  They’re just slimy and—

ME:  (sits up)  They do have flavor, though.
HIM:  (scoffs)  Okay, what flavor?
ME:  Umami.
HIM:  What?
ME:  Umami.
HIM:  You’re just making noises!
ME:  No, it’s… umami!
HIM:  What is umami?  What flavor is that?
ME:  Like… olives or mushrooms or—
HIM:  Mushrooms don’t have a flavor either!  They’re just slimy!
ME:  …
HIM:  …
ME:  Umami.
HIM:  Stop making random noises and explain!
ME:  It’s a flavor!  Like salty or sweet or bitter or—
HIM:  Okay, but what does it taste like?
ME:  It’s the taste in olives and mushrooms and… (googles for inspiration)  green peas and potatoes and… pork!
HIM:  You’re just listing random foods!  And potatoes and peas don’t have a flavor either—they’re carriers for seasoning!

So next time y’all are mocking him for something stupid he said or did, have a little compassion.***

His tongue is defective.   How sad is that? 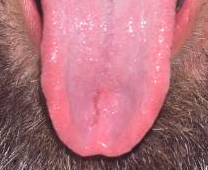 * I get so many anniversary parties every year.  And I didn’t even have to cater my first reception—it was my office Christmas party!

** Apologies to poets.  And the blind.  But not to blind poets, because y’all know what you’re doing.