Here is a thing I do not understand.  And I know from reading the comments that some of you[1] do not enjoy haunted houses, so I put it to you:

Why do people who paid for the privilege of being scared get all aggressive about the fact that they got what they paid for?

That’s not your safe word.

Here’s the thing: if my scare falls flat—it happens to the best of us; timing might be off, maybe they saw me coming, or I’m just not their cup of horrortea—I get mocked, hard.  The customer laughs, or they’ll throw my line/noise back in my face, or sometimes (mostly with my more diminutive coworkers, truth be told) they’ll get personal.

DECAYING MAID:  I had a customer point at me and shout, “YOU DON’T HAVE ANY PARENTS!”
ME:  What?
CLOWN EATER:  … I don’t get it.
DECAYING MAID:  Like I, personally, don’t have parents.  Like he knows me and I—
STAGE 2 ZOMBIE:  That’s messed up.
CLOWN EATER:  What is wrong with people?
ME:  They’re fuckin’ savages, I tell you.
DECAYING MAID:  It was just so random, though!
ME:  Hang on… No, I get it.
ALL:  (turn to me)
ME:  See, he probably thought he recognized you, thought you were this person he knows.  An orphan.  Probably one who’s really sensitive about it… maybe they only recently lost their parents or something?  And he decided this was the moment—while you’re at work and he paid $30[2] to take a tour of your place of business—to mock you for being an orphan.  Only you’re not that person, so it just ended up being awkward for both of you and now he’s gone away confused about why you didn’t burst into tears.
DECAYING MAID:  (nodding)  Makes sense.
ALL:  (nod)
ME:  … Nobody’s going to comment on the fact that I spun that into a whole story about that guy being a garbage human who mocks orphans at work and is too stupid to identify the right one?
STAGE 2 ZOMBIE:  Yeah that got dark…
CLOWN EATER:  I mean…
DECAYING MAID:  It made sense, though.
ME:  (shrugs)

St. Louis’s finest hang out in front of my haunt.  Partly because we have line actors who keep them entertained but mostly—I believe—because we’re good for at least a couple of easy tickets every night we’re open.  Why?  People come out, having paid us to scare them, pissed off[3] about being scared.  Some of them decide to deal with these feelings by fighting amongst themselves, or with other customers, and the police are great at breaking that shit up before it even starts.  Some of them decide the best way to get full value for their dollar (having, statistically speaking, blown another $50-120 in the gift shop on the way out no matter how keyed up they are) is by breaking into the cars of the people they paid to scare them.

Problem: customers don’t know where we park.  They do figure out pretty quickly where other customers are parked, and that the police are watching for exactly this sort of activity.[4]

It never ceases to amaze me, as I hide in my dark corner (or sometimes out in the open, if I’m feeling sassy) the number of people who talk outrageous amounts of shit about how they can’t get scared on the way in, talk shit about how we “cheated”[5] on the way out, and in between will cry, scream, and pick fights with inanimate objects.  (If only I had video of the guy who tried to fight a box.  An actual, ordinary, wooden box.  I am not making this up, and he wasn’t even drunk.) 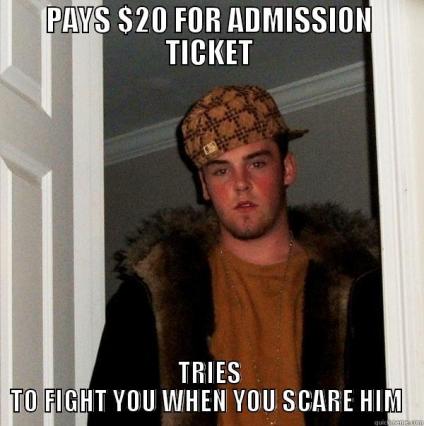 Husband, of course, worries about this.  Knowing how dangerous and violent (there was an incident last year) things can get, he is much less a fan of the “I scared this guy so bad he tried to fight a prop” stories.

ME:  But that’s why we have security.  Because customers are basically wild animals.  Last year they broke a bunch of TV’s.
HIM:  Seriously?  What is wrong with people?
ME:  They get inside a haunted house and they revert to this really primitive state.  Some people’s most primitive self is a goddamned savage that pees on our crocodile[6] and smashes our TV’s.
HIM:  … Some people see something moving in a dark corner and throw their friend at it, yelling, “HERE, TAKE HIM!”  (laughs)
ME:  (lifts superior eyebrow)  And aren’t you glad you know that about me?
HIM:  (smirks)  Yes.
ME:  In case of zombie apocalypse, you’ll be the one at the back all, “Okay guys, let’s just get through this.  Let’s just make it to the next building we can board up for the night” and I’ll be all, “Yeah yeah but also?  Let’s grab some babies while we’re out here.”
HIM:  (shocked)  Why babies?
ME:  (patiently) They—
HIM:  You’re just gonna throw babies to the zombies?
ME:  … And toddlers, if they’re around.  I mean, only if they’re available—I’m not gonna steal babies or anything—
HIM:  (horrified)
ME:  But… look, will the zombies get them anyway?
HIM:  I… probably…?
ME:  Then… isn’t it better we have them?  As a distraction?
HIM:  But then there’ll be zombie babies!
ME:  And I, for one, would rather face those!
HIM:  …
ME:  I’ve thought this through.

[1] For reasons that will remain equally mysterious to me.

[2] Or whatever the fuck we charge—I honestly can’t keep track of it anymore.

[3] And, more often than you’d believe, pissed on.

[4] I’m told they get a lovely suite for the night, with loads of amenities and a free meal for their trouble, so that’s nice.

[5] Don’t ask me to explain that.  Apparently pretending to be a doll is cheating, hiding is cheating, and wearing a mask is cheating.  Also in the category of cheating: sound effects, props, following them, jumping around, having “secret tunnels” (we… don’t?  We just know our way around, because we spend more than one hour a year here) and—my personal favorite—“saying that shit.”  Side note: I am not aware of any game, so I fail to see how what I’m doing can be considered “cheating.”  I get paid a paltry sum to douse myself in blood and scream in people’s faces; if I’ve got to follow bullshit rules and win a game while I’m at it, I demand a proper salary.

[6] And if you think that got cleaned up quickly and didn’t smell for weeks on end… you’ve never worked in entertainment.